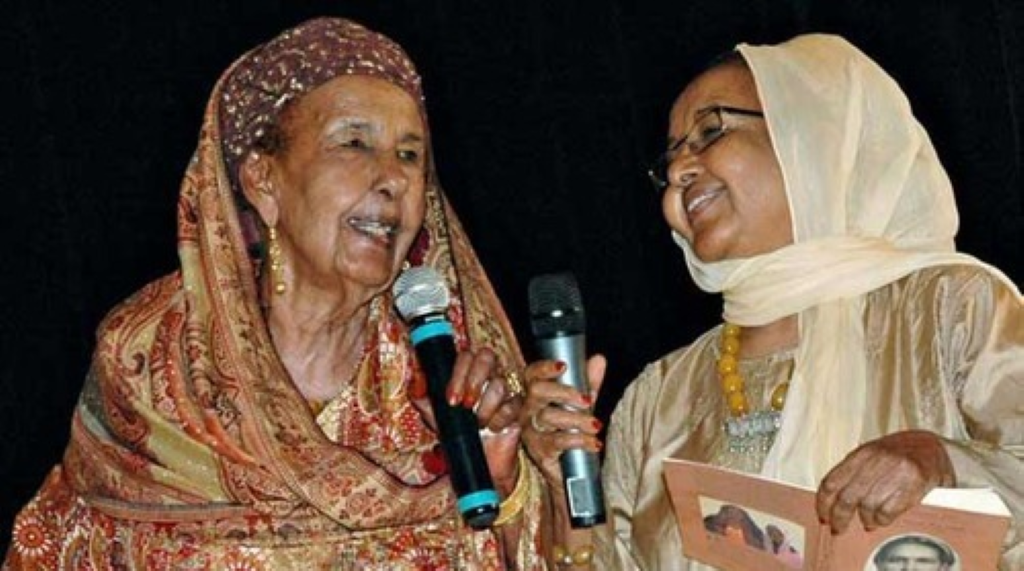 Ran away from home

Xaawo Jibriil Maxamed was born in 1920 in Wisil, a small town in Mudug, to a nomadic family. Her father was a religious teacher and poet, known in the community for his generosity. At a young age, Xaawo was intelligent and already composing poetry, even verbally attacking her younger brother over a piece of meat. She flourished under her father’s approval, although he once composed a poem rebuking her for neglecting her flock of goats and allowing them to escape.

When Xaawo was sixteen, her older sister died. The widower believed he didn’t fully benefit from his marriage with Xaawo’s sister, even though they were married for eight years and she had bore him four children. He gave the father of Xaawo two options, either give him a maiden girl as a new wife, or return half the camels he had given them as the bride price for the deceased daughter. Unwilling to risk returning camels received in bride price, the family agreed to marry Xaawo to her brother-in-law.

When Xaawo was informed of her imminent marriage, without giving her the right to refuse the marriage, she was also told to serve a bowl of milk to her future husband, who was lodged in a hut made especially for guests. When she saw the old man she was expected to marry, she flung the bowl and all of its contents into the man’s lap in a fit of outrage.

Unable to challenge her father’s decision, Xaawo Jibriil  ran away from the village. After 2 days of scorching sun and moonless nights, going through thorn bushes and dry grasslands, she encountered a caravan headed to Galkacayo. The nomadic strangers took her in and helped her evade the man who was pursuing her – an experience that, in later years, would lead her painstakingly to assist girls who were forced to marry against their wishes.

Shortly after this, she married a young soldier serving in the Italian colonial army. However, they separated after five years of marriage. Her husband kept custody of their two older children whilst she kept the youngest.

In 1943, Xaawo came to Beledweyne, where she swiftly remarried for the second time. Unfortunately her new husband was brutally abusive towards her. One night, he beat her with a stick whilst she was sleeping. His reasoning: ‘I am the man of the family, and a woman should accept whatever her husband does to her, right or wrong’. The very same night, Xaawo left her home, and the next morning she sent a message, by way of a poem, asking for a divorce and also telling him her reason.

Her husband was resistant, but eventually, in 1945, she achieved her divorce and moved to Mogadishu. There she received with reer Aw Maxamuud, sons of her uncle Aw Maxamuud Maxamed Ciise, who were among the distinguished residents of Iskuraran, an area of Mogadishu, and at the epicentre of the movement for Somali independence.

She joined the Somali Youth League, pushing for liberation from colonial Italian powers. At that time the SYL was the only party that was committed to the cause of Somalia’s independence. Its leaders encouraged the people – men and women – to aim for nationhood; to stand united for the liberation of their country; and to strengthen national cohesion by repudiating tribal sentiments.

Patriotic songs and literature inspired this nationalist movement, and Somali women were at its centre, raising funds, creating crafts, cooking, organising and taking part in rallies and demonstrations for independence. Together with Khadiija Muuse Mataan, Xaliimo Soofe, Xaliimo Godane and many other women, they made gabays and buraanbur exposing pro-Italian men and promoting the SYL.  patriotism and women’s rights.

Eventually Somalia gained independence in 1960, where it became a sovereign state and together with former British Somaliland formed the Somali Republic. The joy and jubilation quickly made way for disappointment and misery, for the new government didn’t fulfill the promises made to the people of this newly formed country. Maandeeq, the much desired, bountiful she-camel that produces an abundance of milk, what was a metaphor for the Somali Republic, became Baaqimo, a camel that does not produce enough milk and is only good enough to be slaughtered for food.

In two buraamburs Odeyaasha ina akhiray [“The old men who are holding us back”] and Dulan nin wada [“The wicked men”], Xaawo Jibriil exposes politicians who, in order to keep a permanent hold on the Somali people, resort to old tribal passions, vote-buying, and rigged elections.

Even though Xaawo Jibriil was creating poems about serious topics, she also made poems about things she experienced in her life, like the time she got a marriage proposal, which she declined, giving her reasons in her gabay Jawaab talo guur, or the time she consumed jaad.

In 1990, Hawa and her family lived in the centre of a battlefield. She did her best to assist her neighbours amidst violence and looting. However, after the immediate fighting had ceased, she learned of the death of several relatives and was prostrated by grief. Later, the compound in which she lived was invaded by gunmen, who killed one of their guards, and shot three men, one of whom was her son-in-law, a former minister in the Barre government. Hawa ended the crisis by handing over all the family’s gold and money. After this traumatising experience, Hawa sought asylum in Canada as a refugee, where she joined many of her relatives. Despite this, the transition to a colder climate and an unfamiliar language was difficult, and soon she became reclusive.

Back on the big stage

Fortunately, Xaawo Jibriil’s life in Canada wasn’t only confined to the four walls in her home. Through her involvement with Jumblies Theatre, an organisation that creates art with communities, and multi-year projects leading to large-scale productions, Xaawo was on the big stage again. With her community in Toronto she produced Bridge of One Hair, a play inspired largely by her life and poetry, which premiered in April of 2007. The play provided Xaawo with citywide and local recognition and respect, and has made her feel much more at home in Toronto. Together with her daughter Faadumo Cureeji, who also has an interesting story, by being the first Somali woman to receive a degree and becoming a Secretary of State for Education, Xaawo wrote a book about her life and her poetry, which got translated into English.

Still, until the end of her days, she remained a source of inspiration for her compatriots in the Diaspora and in her home country. urging especially young people, to make good use of the opportunities offered to them in the lands that have given them shelter. Only then, she insists, can they eventually be of help to Somalia. Ilaahay ha u naxariisto, Xaawo Jibriil Maxamed passed away in 2011.

You may have missed